Random free association post because I need something to jar me out of this creative ennui.

I need to hear that Doors song right here, the one where Jim speaks about divining the day with the first thing you see?  hang on, I'll get it for you...


since it's almost 11am, and I've seen a lot of things already today, I'm just going to spin in my office chair with my eyes closed and the song playing until he says 'first thing you see', then stop and open my eyes... 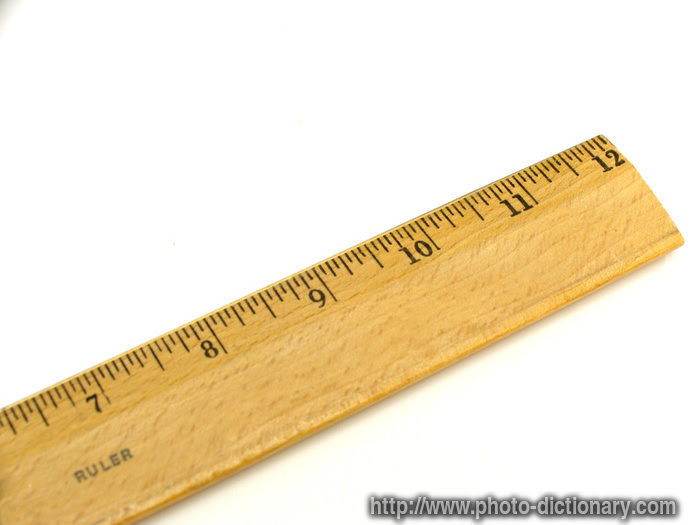 hmm...what can I do with that?  a wooden ruler.  I can talk about the fond memories I have of my grandmother's jointed, wooden yardstick - perhaps some of you remember those? 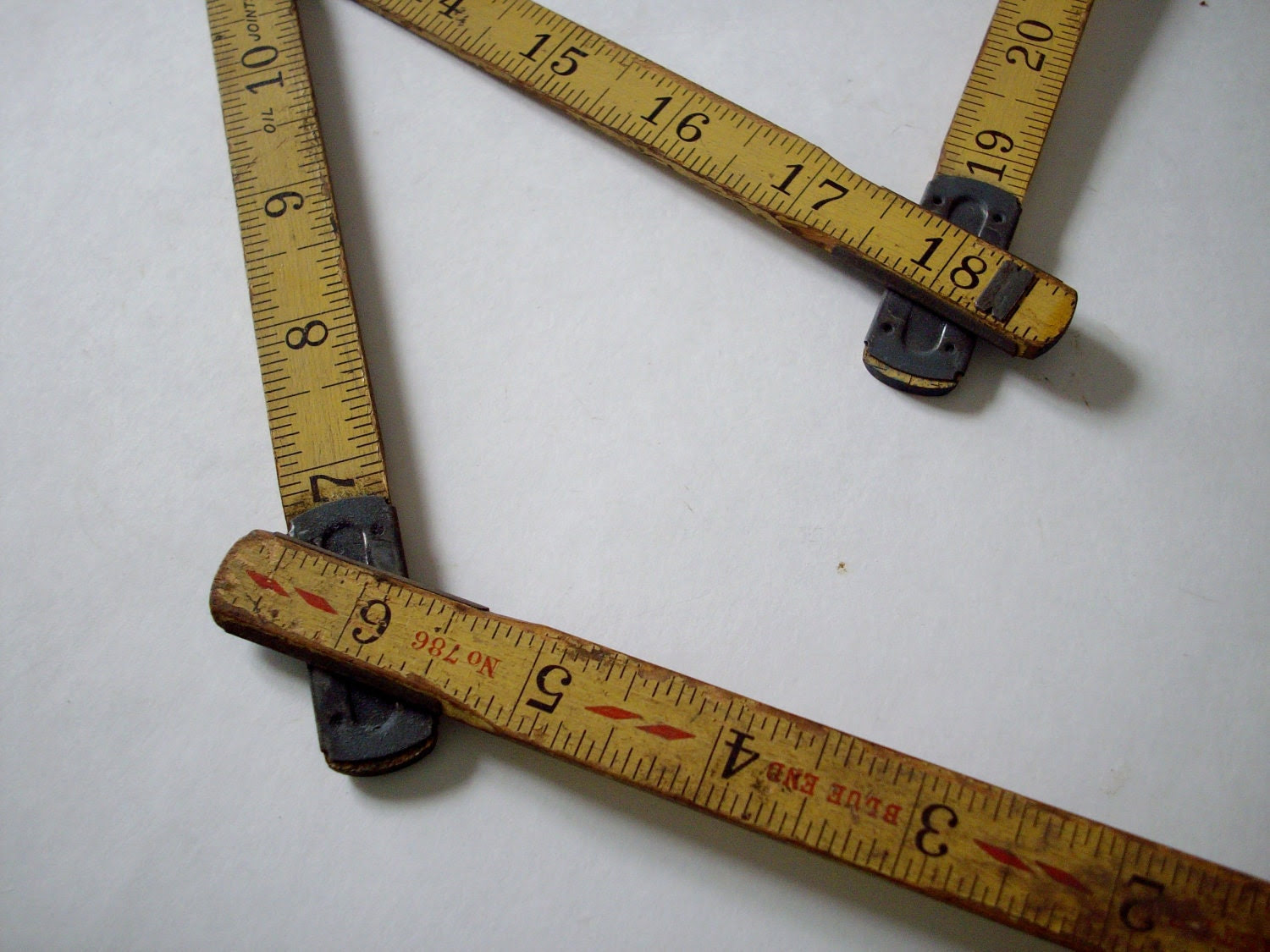 they were great fun to play with.  you could make stars out of them, fold them into the letters of your name, make a mountain range or the ocean out of them, you could make either a hexa- or pentagon but I can't remember which...though I suppose if it was the hexagon, you could make the pentagon, too, duh.  other cool things I remember from my grandmother's kitchen were her rubber band ball, the giant blue and/or red flowers of the wallpaper, and the big drawer with the sliding top where she kept the dog biscuits.  just out the side door there were daffodils planted along a high white lattice separating the narrow strip of grass between my grandparents' and their neighbors' driveways.  it was a small kitchen, but cozy to me, and I don't really remember eating in it so much as playing on the floor, or dodging older, female relatives at holiday dinners as I slipped through the door to the basement to go hang out with my cousin in the dimly lit, half-finished, man-cave where my Uncle and Grandfather must have gone to build train sets together, once upon a time, and where my grandmother would sew.

it's interesting to me how I can still remember the details of a house that I haven't seen in more than 30 years, but I guess it's where all of my earliest memories come from as it's where we lived when I was born, and the emotional foundation for what my psyche built into my definition of Home.  in particular, the Passover celebration was the time of year when the largest number of family members would gather in one place at one time, save for the proverbial weddings, funerals, and bar mitzvot.  I wanted to share a funny 70's pic of the extended clan dressed in our holiday best, but I don't seem to have any of those.  one of the disadvantages of being disowned by your family is not having access to any archival family documents such as photos...ah, well.  here's what I did find: 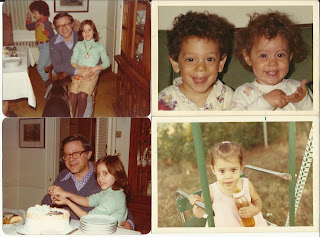 aww!!!  on the top right we have what I thought was my brother and I on the living room couch, but now that I look at it, that's not the couch I remember being in the living room.  obviously I was very young, so it's possible that my grandparents got a new couch at some point...I do know they had this picture blown up to poster size, and it hung in the hallway as long as they lived there.  bottom right is me in the back yard.  top left is my grandfather, Sheba the dog, and I on my 8th/his 57th birthday, in the dining room (dorky bro in classic 70's-wear in the background).  and on the bottom left you can see the doorway into the aforementioned kitchen.  oh, and my hot 70's wear is totally hip, by the way, and I still have that cool necklace my Uncle gave me.  which reminds me... 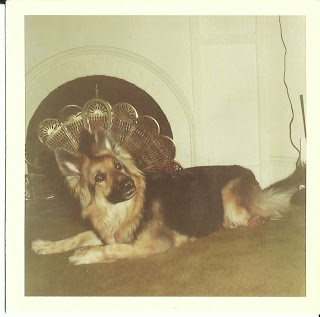 ...here's Ayesha in front of the fireplace in the living room.  she was the dog of my infancy, the one who slept under my crib in the 'back room' when they brought me home from the hospital, and wouldn't let anyone in unless they were my mother, or accompanied by her.  the story also goes, that when my parents arrived from Israel to stay with my grandparents in New York, the dog was less than thrilled to meet my father, who must have smelled of a million things she had never sensed before.  he awoke in the middle of that first night, in a strange, new country, next to his pregnant new wife, in her old bed in her parents house, with the dog standing over him, staring him down.  having been a shepherd during his youth, he understood dogs well, and got out from under the covers to sleep on the floor, while the dog slept in the spot next to my mother.  the dog then accepted my father, and became my fierce protector, even helping me learn to walk by acting as my support and guide - which I do remember.  she often led me to the big drawer with the sliding top that my grandmother kept the biscuits in.  she couldn't slide the lid back, but I could.  it was a beautiful relationship.  her death was also the first one I experienced, and I remember sitting down to dinner at my grandparents' house and wondering, "where's Ayesha?".  they all got quiet, and my grandfather told me she had died.  I remember saying, "ohh...", and shedding a few tears for her, but somehow knowing that Death was what would eventually happen to us all, and while it was sad, she had been an extremely good dog, and I had loved her.  then I ate my dinner.

true story - or, the story my brain remembers, anyway.  the way our minds process information is such an amazing mystery, I often try and remember that the reality I think I see is most likely other than what it is, and quite possibly completely different from what anyone else sees, am I right?  that 'reality' is sort of an undefinable non-absolute that should function as my constant reminder to take things just a bit less seriously, and remember to keep my thoughts tuned in to that which raises the vibrations, uplifting the heart and spirit.  that rigidity is limiting, and continued attempts to stuff myself into a mold I do not fit are counter-productive, and that I need to redouble (re-triple, re-quadruple...) my efforts towards actualizing a more sustainable lifestyle in which to move forward.  the stress of being less than everything I am gets overbearing, and I am seeking towards becoming unburdened.  the pursuit of my own freedom, I want to be free...though sometimes I fear that the dominant paradigm would happily grant me the darkest possible definition of that desire, but that's another (much more controversial) post.

ah, well...the bittersweet of my connection is calling to me in the song of the season, blowing lonely, without enough fire to graze the edge of the chill.  so what will I burn for warmth?  the past, with its sadnesses and injuries?  the poisons from my body?  the doubt from my mind?  if a song and spin in a chair can take me from a wooden ruler to the relative safety of my earliest memories, think of the great things we can build from our vast and beautiful imaginations...or am I just reaching for some kind of conclusion to a random post?  I think that's likely since this ramble didn't turn out like I thought, and I'll have to give the idea I originally meant to follow another go.  sigh.  still not inspired, still don't feel 'fired up' but I'm out of time to sit here on my ass and play with this stupid machine, because there's so much I still need to get done today.  such a shame that a body needs to sleep, or my productivity would skyrocket!  well, off to get caught up with some 'real life' tasks, but I'll talk more about the ways my thoughts are leaning in terms of manifestation and freedoms.  what makes you feel free, or what do you think you'd like to move towards in your life to make it more closely match what you imagine it should be?  and what inspires your progression on your path?  are you on a path?  are you wearing underwear?