Dona Nobis Pacem - "Peace in the Time of Quarantine"

"Peace in the Time of Quarantine" is the theme of this year's Blog Blast for Peace.  I've participated on and off for several years, and this year...well, this year I hardly know what to say about the subject.  As usual, I'm (fashionably?) late to the party, and as I sit in the gathering dark of my apartment on November 4th, waiting for the United States to oust our moronic, racist, rapist, tax-evading, mentally unbalanced, trustafarian crook of a side-show 'president' from our midst in what should be a landslide victory for another questionable and creepy politician with a running mate who gets the side-eye for her past involvement in destroying innocent people's lives with undeserved prison sentences, I find myself exhausted, disillusioned, and angry.  How did we get here?  How did we come to find ourselves with so many struggling, unemployed, hanging by a financial thread about to fall into ruin, with hundreds of thousands of us dead and dying from a virus that we had every tool necessary to avoid?  Families separated at the border, children in cages, women in ICE 'detention centers' being sterilized against their will, Black women and men murdered in cold blood, missing and murdered Indigenous women, Indigenous water protectors shot over pipelines crossing their sovereign lands, Flint Michigan still without clean water, trans people regularly beaten to death, sex workers forced out of their trade by vengeful politicians regularly caught with their pants down in the company of their rent-boys...the list goes on, and the rich continue to turn a massive profit at our expense.

So how did we get here?  Incompetence.  Corruption.  Patriarchal capitalistic values.  Individual/institutional/structural racism.  Cronyism & nepotism.  A lack of decent education giving us the tools to do the work of learning truth ourselves.  For way too long, the white establishment has lived in comfort and complacency within a system built for them and them alone, and I had hoped that their time of reckoning was at hand.  I'm all for tearing it down to the ground and rebuilding a better world under the guidance and supervision of traditionally marginalized communities.  While I had really hoped to be voting for Bernie Sanders in this election, I'm also well aware that a country that failed to elect a woman for president will never elect a Jewish man either, however innocuous his Jewishness actually is to the Christian majority.  So we've got Uncle Joe McFeely-Hands, and Cop-ella DeVille instead.  Great.  Wonderful.  I'm filled with an overwhelming sense of peace...not.  It's enough to make me want to follow through on my constant threats to exercise my privilege to live in another country (which comes with a host of it's own issues, of course).

As for the quarantine, I'm another one of those middle-aged Gen Xers who's more than happy to stay home avoiding people for the most part, though I do miss seeing live music performed in a space where I can dance with others who also love to get their groove on to good tunes.  Oh, and I'm completely broke for lack of work - that part sucks balls.  Other than that, quarantine has been, in a sense, good for me.  Knowing I would go off-the-wall bonkers if I didn't get outside for fresh air and exercise regularly when my state went into lockdown over the coronavirus, I started walking outside three times a week.  Nothing major, just up the hill of my street and back down, maybe a half mile all told.  It was more effort than I thought it would be at first, but as the weeks progressed, it got easier, and I added jumping jacks at the top of the hill, which I increased over time.  At some point, I started jogging to the bottom of the hill, which eventually led to my downloading the 'couch to 5k' app to my phone, and working my way up to jogging for 30 minutes straight, eventually to a distance of 5k (3.1 miles, which takes me about an hour...yeah, I'm slow, mostly because I was more than 100 pounds overweight when I started this journey).

So what does me getting my jog on have to do with peace and quarantine?  well, like many Americans who have long been concerned at the way our country's politics have been moving closer towards fascism, I stayed up late last night watching the results of our election come in, and when I finally called it a night out of exhaustion, I didn't sleep well.  Still, I was up near dawn, as is my habit, got into my running gear, and...sat down at my computer to check what had transpired with the vote-counting overnight.  The results were not as encouraging as I had hoped, and with a growing sense of doom I couldn't quite explain - given my firm belief that Uncle Joe was still going to win - I went to the trail to get my run on.  If it was due to the previously mentioned lack of quality sleep, the fact that my leggings are getting too big (I'm down 32 pounds) and kept falling down, my app not tracking my mileage properly, doing yesterday's workout too late in the day and not leaving myself enough time to recover, not nourishing myself well enough, 'monkey-mind', or not being able to get out of my head, I had a crap run today.  I only ran for about a half mile, then walked another mile to a bench where I sat in the sun and took some time to enjoy the peace and quiet.  When it felt like time to stroll back down the trail to my car, I stopped to watch the birds and squirrels, and thought about how I no longer take the time to go camping, or even just be in the woods with no agenda other than to commune with nature.  I also found myself composing social media updates in my head, and how thinking about what I was going to post when I got home ran counter to why I started this journey in the first place, and had me considering that I might be losing sight of my WHY. 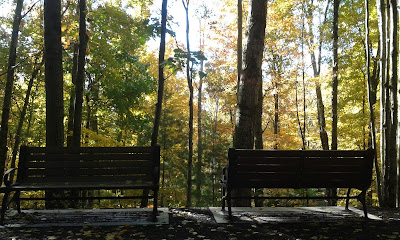 My WHY was originally to learn to celebrate myself in healthier ways than by overindulging in food & drink.  My WHY was to get fresh air and exercise on a regular basis.  My WHY slowly became a way to clear my head, have some 'me time', listen to music, and have fun while working to boost my metabolism, lower my blood sugar, and regain some of the strength and stamina I lost from spending too much time sitting on the couch.  Sadly, it seems I've become overly dependent on the positive reactions and supportive comments of my running community on social media.  And though they are inherently uplifting and helpful, the fact that I'm thinking about them on my run rather than focusing on where and how to place my feet, or paying attention to my breathing, my pace, or simply enjoying the fact that my body is strong and healthy enough to carry me down the trail for a certain amount of time and distance  - or the privilege of having the time and safe spaces to enjoy running - speaks loudly to the kind of chaotic disconnect I feel in our collective unconscious...as if we've been encouraged to lose our way.  On the other hand, there has also been a collective uprising against that disconnect, and while that movement gives me hope, it still hasn't brought the level of change I think we need in order to move forward with purpose again.

The fact that 24 hours after many of the polls have closed we still don't have that landslide victory I had hoped for tells us that at least half of this country is still willing to throw the other half of this country under the bus to ensure their continued complacent comfort at the expense of others, and that's a huge problem.  Our work is nowhere near done.  And that's exhausting.  So incredibly bone-tiring, it affected my ability to jog happily up the pretty wooded trail in my quaint little community where I don't have to worry about being out alone for a run.  Can you imagine how it must feel to those on the front lines?  To the folks who do the work because their lives depend on it in a way I can only partially feel, and most others don't even deign to feel, or dare to push back against?  How tired do you think those folks are?  How much jogging on maintained wooded trails for health and wellness do you think they get to enjoy?  No matter how much it makes us want to lie down and give up, we simply can't fail in continuing to support those who really do need us to hold them up and offer our protection so they can rest, and continue to take the lead.  We need everyone to be all in for everyone else, no excuses.  It's the only way we build a world worth living in for future generations, and really...if we're not here for that, what the hell are we here for?