this is what my hair usually looks like.  back in May, I wrote a post about why I wanted to dread it again, and talked about wrapping it up in braids and wishing it well. 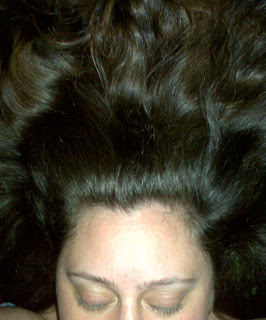 by October, some of the braids had started to pull into knots vaguely resembling seahorses, that I didn't like, and some of them just curled into pretty ringlets, that I do like.  but I've decided that it isn't the dreads I really want - it's the braids and the jewelry.  so I started combing out the dreads and re-braiding the sections to keep them neat during the reclamation process.

see?  I dig this more!  and the ends remind me of feathers.

I've always loved my hair in braids, and when you have dreads, that's all you have - dreads.  you can't really do anything with them other than wear 'em up or leave 'em down. so I'm on to the next step in the development of the craft project that is my hair. 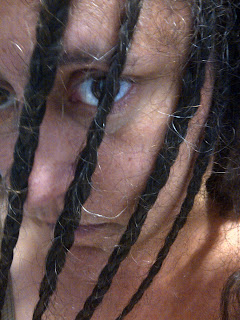 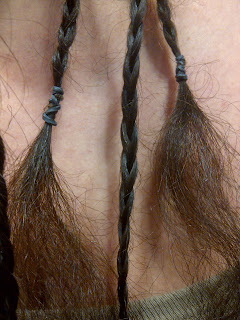 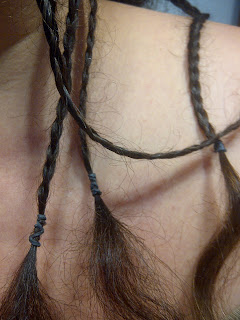 and to touch on the spiritual significance of the journey that I discussed in the Splitting Hairs post, what I found was that feeling like even more of a pariah than I usually do in situations like PTA meetings and school functions, job interviews and employment and training meetings, made me somehow more articulate - more easily able to put forth my viewpoints with rational discussion and argument.  it was like everyone expected me to be stoned (which I aspire to be), or stupid (which I do not).  I like the looks of surprise I get when people find me to be genuinely engaging and knowledgeable, though it bothers me to be constantly underestimated and devalued - judged part and parcel by my less-than-conventional attractiveness.  yes, I can speak to this, having witnessed my own transition from 'you're so pretty' to 'you'd be so pretty if...', and I won't even get myself started on how that kind of thinking lets thousands of women and girls go missing every year, because that's a different post entirely. 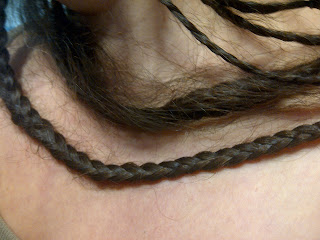 on a strange side note, having messy hair made me acutely aware of how shabby my clothes are, as I felt a need to balance the head-chaos with body-order, like an embodied Tower card...hmm, hadn't thought of that symbolism 'til just now, and it's quite powerful and significant, I have to say!  the concept of vanity played through my mind a lot, as I found that even a hairstyle based on neglect had me up in the bathroom mirror oiling and twisting, shaping and contemplating, tearing and adjusting, decorating.  I thought about how it's just natural to want to groom oneself, as I watched the kitten do just that, and about how Nameless Spirit doesn't give a shit about my hair, one way or the other. 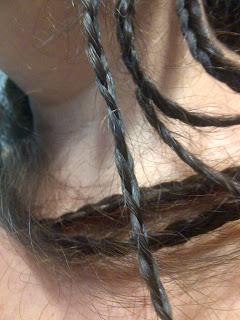 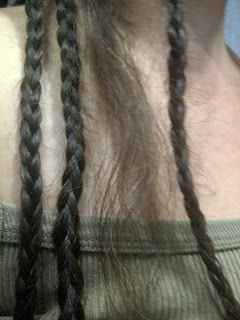 I'm still thinking about how it affected the people who didn't expect to be tested by my hair - the good friends who hated it and were kind enough to say nothing, those to whom it didn't matter one way or the other, and even those who said they liked it.  it's nice to be at a place in my life where I finally feel comfortable enough to explore my own fancy, and have that be the deciding factor as to what's done with the stuff - it feels more like a personal decision than a social responsibility, which is great, because the greater good is demanding more from me these days than the gift of some vitamins and minerals I grew on my scalp, lovely as they may be.