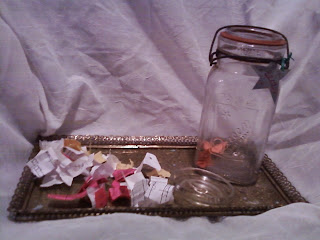 Tonight we decided to review our best memories from our special memory jar, a tradition we started last year (Memory Jar 2014) - here is the list of what made us happy in 2015:

...and even though it hasn't happened yet, I'm going to add the New Year's Eve party we'll be attending tomorrow, with some of the people whose names grace this list of happy-making memories, so I feel it's not a far stretch to consider we will have a Great time with them then, too!  Also, the Ramones gig is sure to be a knockout second weekend in January event, and I'm willing to bet it will top the list of 2016 memories next year!  I hope you all had a wonderful trip around the Sun, and that your lows weren't too low, but that you're highs were wonderfully high!  Here's to more of what's good in 2016 ~ see you next year!
Posted by Mama Pajama at 9:43 PM 2 comments:


By the time Malinda was done with her sentence, Bitsy had stopped buttering her toast mid-stroke, and stood frozen at her kitchen counter, the phone cradled to her ear by her uplifted shoulder, head tilted to one side.  There was a stretch of silence on the line - a pause long enough to prompt Malinda to check the connection.  "Hello?  Bits?" she prompted, "You still there?"
Bitsy shook herself and put down the knife.  "Yeah...yeah, I'm still here, Mal, I'm sorry.  I just...well...that's kind of a lot to take in all at once...I'm in a bit of shock over here!  Are you okay?"  Stupid question, of course she wasn't okay.  How could anyone be 'okay' after a night like that?  Say something to make her feel safe you idiot!  She chided herself for being caught off-guard, for forgetting to tell her friend what she needed to hear most, right away.  "I'm here for you, Mal.  I love you, I cherish you, and I can be there in 10 minutes.  I'll leave right now..."
"No...no, I'm okay.  Well, I'm mostly okay...I'm okay enough for you to not run out of the house in your jammies and drive over here like a bat out of hell to help me deal, anyway.  In a bit, when I've had a shower and a minute to chill, okay?  I need to try and figure out my next move...put my head together a little, and breathe."
"If you're sure..." Bitsy prompted, listening to her best friend drawing a deep, shaky breath, and letting it out slowly, doing her best to regain her composure after such an emotional testimony.  "You'll call me when you get out of the shower and let me know when you're ready to have me join you in a cup of tea?"
Malinda gave a weak chuckle, and replied, "Sorry, we won't both fit."  They'd been saying this to each other for years - since high school - and no matter how shitty her life had become overnight, her heart swelled with love that her dear friend had found a way to work it into this improbable and morose conversation, and employ it deftly enough to pull a giggle out of her, even under the current unhappy circumstances.  "I love you, Bits.  Your the best."
"I know," Bitsy smiled back, "that's why you called me.  Now get in the shower so I can run down to the bodega in my jammies like a bat out of hell, and buy us the biggest box of chocolates they have.  And ice cream.  And pizza!  And probably a few other things, too.  Call me soon, okay?  Okay.  Love you, bye."  Bitsy stood there, staring off into space, buttered toast in her hand, mulling over everything she had just heard, and began to formulate a plan with which to proceed.


What scheme is this,

this flood of fear,

and look to the extreme?

The lines that spread

as my eyes stream

tears at the loss of innocence,

and the lack of aspiration

Labels: chores, evolution, fuck off, love, pissed off, you suck


It's not that I can't write, it's that I don't.  I could sit down in front of this machine and kick out a jam at any time, it's that I don't make the time to do it.  To put it on the calendar, to compartmentalize the creativity...  We got pretty creative yesterday, with all the art supplies out.  I'm glad - I've been wanting to shift that energy around for a long time, but it took 11 months (already?) to finally settle in enough to get with the proper organizing for this space.  There's still lots of work to do, but the process is 87% complete, at this point, so maybe there isn't 'lots' to do, but more at the fine tuning of making it all pretty, now.


There was a certain nostalgia in the air last night...it was a warm, coastal kind of evening, Floridian to me.  In November!  And the radio was just ON, which isn't the norm.  Made me want to run away with my own circus.  The night where you call that old friend not to say anything, but to just have the line open between you, but because there is such a thing as propriety, you try and fill the space with words.  Why can't we be quiet together?

Once again, I don't know quite what I'm going for, here, I'm just throwing all my thoughts and feeling out into the ether, working through my own issues, and catching up with a bunch of blog drafts that I never finished, attempting to weave the disparate ends of my life together as a means.  Do I add a tip jar to the blog as an attempt to pull in more scratch?  Do I 'monetize' it, and clutter it all up with ads?  Would that really generate any income?  Do enough people enjoy what I slap down 'on the page' for it to make a difference?  Could I figure out how to make it so?  I've never done anything because it made others happy - I've lived my life singularly for my own enjoyment and personal, spiritual fulfillment...until I had a kid, then I added his relative joy to my equation, because, really, that's what parenting is about, if you do it with any level of competence.  He's like my own personal Jesus (with apologies to Depeche Mode and Jesus freaks) - taking into account how I was homeless while I was pregnant, and all the doors of the 'inns' I knocked on were full, and wouldn't let me in.  Since his birth, he has saved me, time and time again.
During my healthy yet impoverished pregnancy, I developed the theory that the Jesus mythology was supposed to make Marys of us all - suffering in holy silence while the war mongers murdered our sons by the thousands in their bloody, useless battles against themselves.  Well, I wasn't going to buy into it.  No one was/is going to hang My son on any cross for such nonsense.  We are warriors for peace and harmony, love and community.  Highly vibratory individuals who choose coming together in understanding as a way to elevate us All.  Are you with me?  Feminism is (finally) back on the rise, and the energies are balancing.  'God', in my experience, is gender-less.  An all-encompassing energy that swirls around us, which can be moved with concentrated will towards a particular goal.  There are Goddesses walking around in my Earthly domain, and I have seen them in their bodies of flesh - you have too, if you are open to their energy, women who stop you in your tracks the way they carry themselves, the power of their being radiating out from them in a powerful enough miasma to knock you off your feet with a longing to curl up in their laps, and return to that place where we all felt completely and securely nourished, protected, and loved.  And where are my Gods?  Hunter S. Thompson is dead, and he was the closest anyone came to that title role for me, other than my dad.  I can only hope they are being raised by women like me, and the aforementioned Goddesses.
We need these children of balance in order for things to get better for us in a whole, global way.  As a well-educated poor person in the Northeastern United States, I can tell you how tiring it gets to sit in a roomful of moms who have the privilege to talk about the tens of thousands of dollars they have to spend on their next car while my old clunker is sitting out in the lot with a smashed windshield and the front end about to fall out from under it.  Or how locally grown organic food is the better choice all around, when I'm living on low-grade pasta, canned food, and half-rotten veggies (if I'm lucky) from the food pantry.  These are lovely people, and I like them all.  Neither am I judging by saying these things, I'm merely putting the situation in context, to show the disparity between our situations, and how it feels to sit among them and not be one of them, even though we are similarly engaged in bucking 'the system'. So they married well, or came from money, or worked hard, saved their pennies, and invested wisely.  So some of them had a better support system, or a more advanced skill-set.  It just strikes me that I end up in these situations where I am rubbing elbows with folks who are obviously so far out of my league, and that I'm trying to give my kid the same advantages as theirs.  Sometimes it works, sometimes not.  No matter how much of an outsider I am - or maybe because of it - I nevertheless insist that the world's problems will be solved by taking a wider viewpoint that includes All members of a community/society, because the next great thinker may just be some kid who had to figure out how to rig some duct-tape fix to keep his single mom's fridge running, or his shoes from giving up the ghost, or some other small crisis that ends up having larger, global significance.  Can you feel me on this?
That's enough random rambling for now, and I have two other pieces I was going to work on to share, as well as another piece I wrote for a different venue.  Let me know in the comments which you would like to see first:  a continuation of the comical werewolf story I was riffing on for The Sunday Whirl, or a more personal essay concerning my experience with child protective services?  Thanks for following along, and I hope you enjoyed the ride.  Also, feel free to share your thoughts on either monetizing or adding a tip jar to this blog, or both.  Which would you prefer?  I wouldn't prefer either, personally, but a girl's gotta make a living if she wants to fix her car so she can get her kid to all those fancy classes that will give him a chance to compete with those who have all the advantages with which he wasn't lucky enough to be born.  Selah ~
Posted by Mama Pajama at 1:27 PM No comments: