An academic advisor of mine once found the beginning of my story to be significant, as a seed that was planted in the Middle-East, and brought to fruition in North America, and I often attribute this early travel experience as the root of my love for The Road Trip, and my affinity for moving meditation. In terms of 'moving' as a noun, as in packing everything you own up in boxes and taking it to another apartment, I used to be fond, but nowadays, not so much.  And while I'm taking the news that I'll be needing to move again soon in as much stride as I can, it does bring on a certain amount of melancholy that comes of my desire to find Home, already, and feel the satisfying settle of my rump on a rocking chair on My Porch, hopefully without the need for a shotgun across my knee (though most likely one for a pipe, and a pull of red-eye).

I promised my son I would stop my yearly relocation practice, that we would stay in this apartment until he finished elementary school, and now circumstance has made a liar of me.  To be fair, they reconfigured the school district and he'll be switching schools next year anyway, which actually opens up the areas we can look in, but I don't make promises to anyone lightly, and I feel badly for letting the little dude down, though the only thing requiring us to relocate this time is our landlady's projection of her pain and suffering in her own life onto ours - she wants to rent the place the more money. I think it's incredibly rude to disrupt the lives of a child and his single, working mother for her own greed, but there doesn't seem to be anything I can do about it other than write it all down and maybe give it to someone who will be moved enough by the story to offer me a better alternative - something sustainable, built to last.  moving every year for more than 20 years ain't no thang if you're living out of your car without much more than a backpack, but in the past 8 years of motherhood, I seem to have acquired a two-bedroom apartment and two cats' worth of stuff (and I consider myself a minimalist) which is too much to haul around in the back of my car, goddammit.

'They' say moving house is one of the most stressful activities known to modern man, and I've done it a great deal more than the average Jane who shares my demographic, so does that mean that I handle stress well?  or that I'm so far out over the top of overload that I'm simply numb?  I'm at that point where the reality of moving it all hasn't settled in because I haven't even started packing, yet, and the really great apartment that opened up got rented out real quick, and the other one I heard about may not be ready when I need it to be...but I feel like it's okay, because the opportunity so wonderful that I hadn't even dreamed it was possible now has the green light to manifest, so...hooray.

It's interesting that this is happening now, of course, because for my schoolwork, one of the things I have to do is write an identity essay attempting to draw circles around my cultural place memories as if they were semi-permeable onion layers - and I've been reading belonging by bell hooks, bringing the lack of/separation from ancestral Homeplace into even sharper focus and having to define it just as it is once again thrown into turmoil, and what that means for me on an emotional level.  this is where I want to speak about the Roma, about being an Israeli/Jewish, 1st generation American, but I lose the plot.  then there's Rainbow and Lake Circle, my places of being that aren't necessarily physically definable, depending on your theory of space.

So where does a woman call home?  where does This woman call Home.  what does that mean to me - what do I want it to mean, and how do I intend to manifest it?  home is where the heart is, surely, and also where you hang your hat - but my heart is in my chest, with my son, my community, the global village and the universe at large, and I currently hang my hat in an apartment in the Catskills, the most recent in a series of apartments I have moved through since 1989.  my memories of a feeling called Home are thus:  my grandparents' house in Long Island and the Jewish holidays, my father's kibbutz and the city of Jerusalem in Israel, the house in Suffern and the Foxwood pond, around the kitchen table in Monsey and the Ramapo Mountains, Lake Tiorati and Harriman State Park, and central Vermont.

that boils down to a firm base in Jewish culture and Earth-based spirituality, centering on family, food, nature, and the interdependence of farming communities that lived on the edge of battle-ready.  everything seemed incredibly secure, in a very fragile way...but I needed to belong to more than all that, so I went seeking my own land and found I wanted to live in the whole world at once, and carry all I needed with me.  but there's this world of expectations, and I was too weak or too poorly informed to know how to go my own way, so I feel 'caught between' - not completely part of any one place or culture or social group.  I 'grew up', that is spent my formative years, attended K-12, in a suburb just 30 minutes North of The Big Apple.  that right there speaks to much of who I am, I think.  but being Jewish, and further, being Israeli, with a war-scarred father straight off the boat gave our family just enough mystery to bear interest, but too much with which to relate.

I felt mostly at home in Vermont, where the agrarian culture of community support is strong, and there is effort made towards keeping the population diverse, but the ties that bind (in a good way) drew me back South to New York - where the juju is questionable - but not directly to the place of my previous suffering, so it can be made well, with the time it takes to build the connections to place I need to grow.  like spreading roots.  like binding my hair.  like finding the poetry in heartbreak, and learning to accept a Call.  I will be open to the possibilities, and will see what can be.
Posted by Mama Pajama at 6:57 PM No comments:

Labels: back to work, bastards, forward motion, fuck off, going mobile, gotta get out of here, pissed off

I was seduced by the sensuous lines of this flower's beckoning... 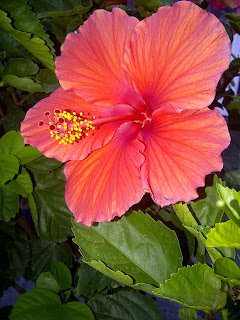 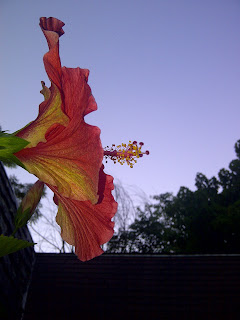 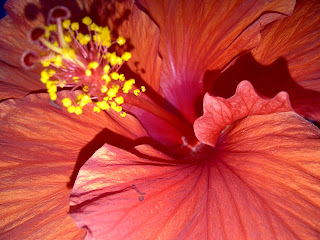 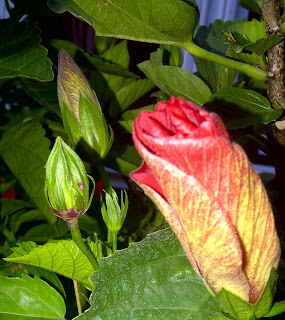 ...and then I digitally altered one of them, and now I feel dirty. 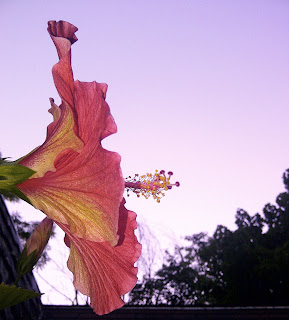 Posted by Mama Pajama at 9:47 AM No comments:


able to respond again, remembering
what it feels like to be
skin to skin
his hands on my breasts
remembering
smooth skin
sliding across me like milk
like silk
like teenaged quickening
that never matures, but stays
rooted
in that love at first sight
the Sun of that Summer afternoon
caught forever
above the ridge line
illuminating a romance
determined not to set
and yet...even after all the years
the intent behind his grin
colors my innocence at each return

Posted by Mama Pajama at 8:09 PM No comments:


the toothbrushes always go in last.  leaving for Vermont in the morning to start my Master's residency - go me! 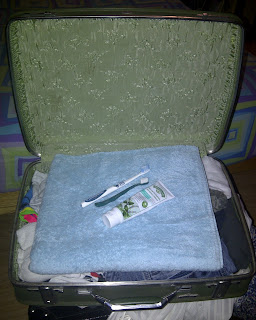 so what type of toothpaste does a peace freak conspiracy crunchy organic mama use? why, the least expensive sulfate and fluoride-free brand on the market! 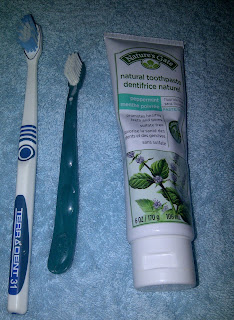 thanks for playing along with my 'photo a day' in July, it definitely was a challenge.  well, off to finish cleaning and packing and making sure my kitties are taken care of, and washing all the dirty dishes before I go...big fun on the horizon, more change coming soon ♥

Posted by Mama Pajama at 1:40 AM No comments: