(not) the final cut

Just a quick post for Summer Stock.  I have a feeling this is going to be the Summer of pictures of kids playing on the slip & slide...  Hey, to be fair, I took 1000 pictures on this particular afternoon, but I'm only going to post two of them (for now).  I love the angle of the lighting in these, and there were a few more that were similarly lit, so some of those may pop up during the ensuing weeks as well.
mine 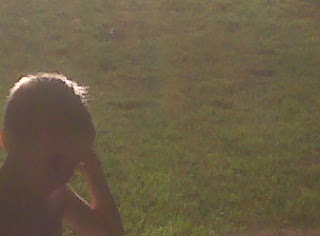 mine and two others 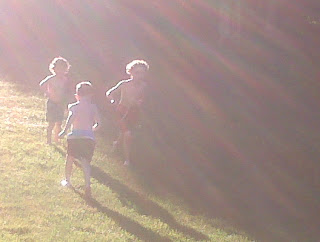 Welcome to our backyard water park, where my son and two of his cousins enjoyed a Friday afternoon of fun together!  I bought the sprinkler and the slip & slide last weekend, and saw the pool but didn't get it.  This weekend, I saw the pool on sale for $20, and couldn't resist!  Looks like a Summer of fun (and I can so see myself sitting in that pool with a frozen Margarita in my hand)! 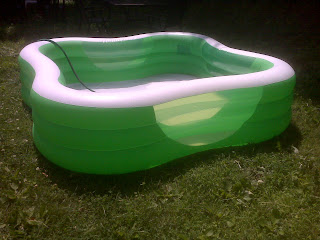 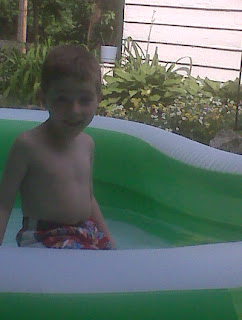 A cool surprise to come home to Friday after school! 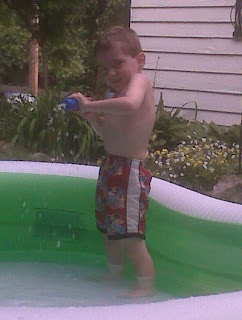 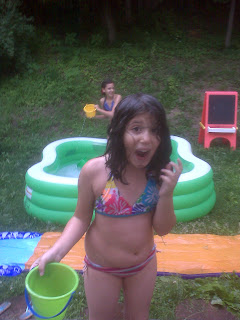 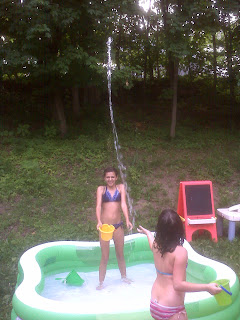 "Take a picture of me throwing water in the air!" 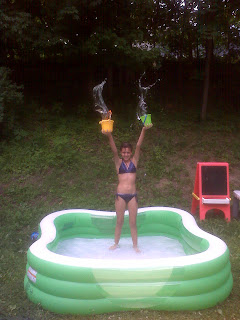 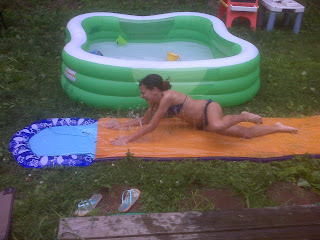 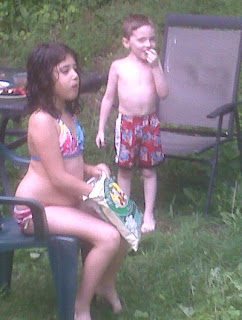 "She's had WAY to much sugar & caffeine, we're gonna have snacks!" 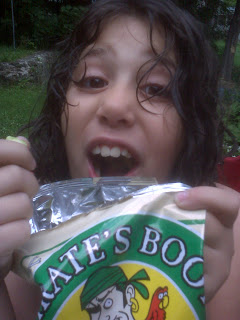 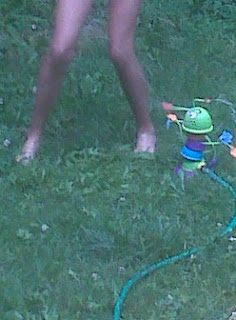 the 'water-pillar' sprinkler was a bit nuts!
Posted by Mama Pajama at 11:34 AM 4 comments:

Inspiration in Action! (with thanks to A.P.)

It's kind of depressing when I have to get my kid to help me with my homework...really, he's great for inspiration when it comes to creative projects.  I just lay out the supplies I plan on using, and watch him go to town.  He won't be home for another half hour or so, and we have to go to the store because we're out of food, but I've been staring off into space, or looking at portraits for too long, now, waiting for the bolt of lightening, and - nothing.  Well, not exactly nothing, but hardly enough.  I'm just not in the mood to play.  The weather is blech, so I'm kinda blech, and I really want to be in a much quieter place then my apartment, watching gossamer white curtains floating on the breeze blowing in through huge picture windows overlooking a blue sky dotted by white puffs of non-rainy clouds.  I'm not much for the beach, but I feel like there should maybe be a beach out those windows as well.  Why not?  It's my fantasy...  The integral part is the quiet, and the calm.  My apartment is too close to a busy road with truck traffic, and there's too much tension in the building itself.  I really wish I had taken steps to be able to move this Summer, and now I don't know if I can count on being able to stay here for another year.  Again, if it were just me, I'd have no worries about this, just pick up and go when and where I see fit - but the boy.  I don't want to keep moving him around.  And he's got a lot of stuff!  I guess I do too, at this point, doing the domestic thing, and the constant relocation isn't as much fun anymore since I need to get a big truck involved, and find people who are actually willing to help me carry heavy stuff.  Just the thought of it is exhausting.

All that is beside the point - it's just another thing that's weighing on my mind and distracting me from the task at hand.  I have a project to get done.  Instead of inventing an entire cosmology (like I even could), I thought I'd just follow the example of what a saint's book actually is - pictures and stories about the lives of saints.  I got the idea months ago when is a saw a 'book of parrots' done up like a saint's book, and it was so playful and fun it made me feel happy.  So, no, it's not an entirely original idea, but it's my take on a theme.

Maybe I need to be channeling Ralph Steadman...

What sort of deities should I conjure?  Perhaps a prayer to the goddess of kitchen scrubbies, a high priestess of elbow grease?  Patron Saint of Domestic Order, unclutterer of corners, scourge of the dust bunny, Knight of the Rosy Toilet - Citron leSurfectante.  He sounds French.  A demigoddess of folly (Giggles), a sprite of the forest whose laughter falls like joy upon the heart.  It is said her playful spirit comes to those wistful for freedom and adventure; she is known to bestow gifts on single parents.   She was born to the High Priest of Health and Wellness (Rawfoodius, or Veggicus?) and the Goddess of Wisdom (Betty, Madge or Gertrude).  Maybe Monsieur leSurfectante won Giggles' heart with his impeccably cozy, shabby chic interiors and noble deeds of stain removal while he was charmed by her eco-minimalist tree habitat.  And they gave to the world five children:  Spic and Span, The Conjoined Twins of Peace and Harmony; leFrog, The Pope of the Ludicrous; Psychotropic Sam; and Dementia, known for her discontent and self-loathing, requiring the employ of lavish gifts, ego-stroking, and undivided attention to successfully dispel her sour aura.

Okay, now I'm having some fun!  Which is good, actually, because it freed me up move forward with the project, and on to the next blog post which will be faintly more somber in tone, due to the nature of the subject.  Ooo, heavy, man! 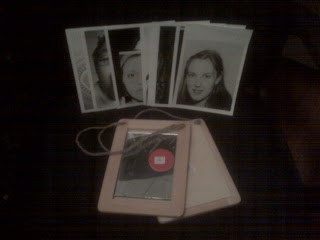