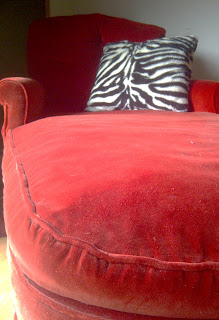 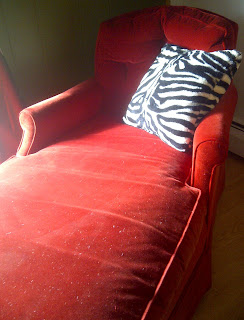 this is was my grandmother's chaise longue, and now it's mine.  though the upholstered sofa, halfway between a chair and a daybed, was believed to have first been seen in Egypt, it bears the French words 'long chair' as it's name - even considering that the Greeks and Romans made good use of them long before France gave it's moniker to a certain style of fried potatoes, fingernail art, or a sex toy with a legend more ticklish than itself.  'The Chaise', as it's affectionately known, like the Coca-Cola sign that hangs above it, is one of the objects that I have known my whole life, having first climbed on it as an infant in my grandmother's bedroom, and I've enjoyed it's cozy embrace in many of the places my grandparents lived over the years.  given the number of various objets d'art my grandparents acquired and lost during their lives, the fact that The Chaise stayed with them until my grandmother's death spoke volumes about what it meant to her, and I am honored that it came to me - regardless of how much it annoyed of my mother (she simply didn't have the room for it at the time, and I did, c'est la vie...or should I say, c'est la mort).  one of the best places I know to curl up and read, watch a movie, cuddle with your sweetie, fold laundry, or simply drift off to sleep, covered in the red and white striped afghan my grandmother crocheted to match her well-loved chaise.