there aren't a whole lot of major Jewish holidays I celebrate at home during the summer months, and I had a pretty busy summer moving out of our house...but once we were settled in to the new place, I took a look at the Jewish calendar to see where I was in the cycle of things I celebrate, and discovered that it was Tisha B'Av (on the eve of August 10th). 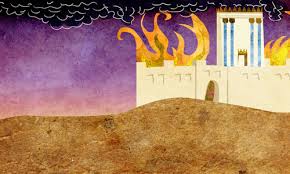 "Tisha B'Av" means the ninth day of the month of "Av", and it is commemorated as the day of the destruction of both the first and second temples in Jerusalem in 586 B.C.E. and 70 C.E. respectively, as well as other horrors, including (but not limited to) the expulsion of the Jews from England in 1290, France in 1306, and Spain in 1492 - it also marked the beginning of the Holocaust.  it is a day of fasting and mourning, and is considered the saddest day on the Jewish calendar.  observant Jews abstain from joyous activity on that day.  it is also one of the last 'holidays' of the Jewish year (the last one I acknowledge).

so, I also got my increasingly spotty period that day, and being extra emotional, I made a connection between mourning the loss of one's temples and spiritual practices to violence as an apt metaphor for perimenopause, and croning.  that for three and more decades of celebrating my own sacred sensuality/sexuality and the universal life-sustaining energies as holy, my body is running out of eggs, and the ability to grow life.  and that's a mournable loss, on a personal level.  it's sad and deserves acknowledgement.  and while I'm mourning the loss of my fertility, I'm seriously over it at this point, too.  I'm glad it's ending, but I am taking the time to notice it (like I could ignore it), and honor my cycle.  it is a significant part of our womanhood, and connects us to a sisterhood.

so I'm transitioning to elder.  it's time to exercise next level wisdom.  after the deep sink into parenthood for one human's entire dependency, I'm coming into realignment with my own creative spirit.  and that's where Rosh Hashana figures in.  the rebirth into the new year.  September 29th, right near the Equinox (I love how Jewish holidays sometimes coincide with solstices and equinoxes).  and I also transitioned into a new living situation during the year I turned 50.  there is so much in motion, universally, that I'm beginning to think that we might be living in exciting times.  I've been toying with the idea of having a 'Jewish Year' to go along with my 'year of Shabbats' that I seem to have had (minus 4 or 5 for gig or team sport reasons) this year.  wasn't there a book about that..?


if I want to do it this year, I'd better get on it - we're already through a bunch of the big ones right up front with Rosh Hashana (for which we said prayers and observed household traditions), Yom Kippur (which we acknowledged and ignored), Sukkot (which we acknowledged and ignored), and Simchat Torah (which we ignored).  at least I knew which ones I missed, and in what order?  but I can still get a jump on Hannukah!  maybe I'll take a tip from the Christmas crazies and start now - make the federally sanctioned 'November break' our Indigenous Peoples' Resistance Day decorating party, and just keep on going from there.  I'll have to do little write-ups to chronicle the journey, of course, and possibly even come up with a new post label.  lightening splits the sky...