'Dona Nobis Pacem' is Latin for 'Grant Us Peace'.  it's apparently from the part of the Christian religious service where the 'sacramental bread' is broken into pieces to distribute to those who choose to take part in that ritual, begging Jesus to take away the sins of the world, have mercy upon them, and grant them this favor of peace.  as long as I've known that phrase (not all that long, in the grand scheme) I didn't know that was where it came from.  I've blogged it, and I've played and sung it with an orchestra I was briefly involved with, and while I can appreciate the stand-alone sentiment of calling out a wish to be granted peace, I'm not one to ask Jesus to just give me something that requires effort on my part to achieve.  I'm also Jewish, so I'm not in the habit of addressing my prayers to Jesus in general, though I've got no qualms with him as an historical figure, given that he was 'one of us', and simply caught a bad rap for his revolutionary ideologies while those rotten Romans were running things, and crucifying everyone in sight who questioned their authority.


ironically, that sounds familiar in the context of the circus we have going on right now in American politics.  so what are people of good conscience to do?  pray to Jesus?  while it won't hurt to do so, it won't solve anything, either.  the folks over at International Alert have developed some strategies for helping people find peaceful solutions to conflict for over 30 years, through what they call 'peacebuilding' - a long-term, collaborative process that begins by doing the research to discover and understand the reasons why people fight in the first place.  while their important work is admirable and necessary, they don't do it in the US at this time, though here's a list of over 100 organizations that DO work in the US:  Peace Organizations Based in the United States.  some of the entries are out of date, or have merged, dissolved, or changed their names over the years, but that still leaves a great deal of people working towards a similar goal.


I was 6 years old when the war in Vietnam ended, and one thing I will always remember my mother kindly for was taking me to welcome the vets home.  she explained that these poor young men had been sent to fight in a brutal conflict that few people were in favor of, and that they didn't deserve the hatred to which they returned, as it wasn't their choice to have gone in the first place.  while we as a family (and as Jews, a People) were and are vehemently anti-war, we also don't believe in abandoning those who serve our country once they return home, in many cases broken, and in need of a great deal of understanding and support.  so it made sense to me at a very young age that we should probably do our best as a nation to avoid war altogether.  but how to foster peace between nations?  I believe a good first step is for us as a country to stop making and shipping so many weapons all over the world, to all sides of many conflicts, for a sickening amount of profit that only benefits a small percentage of our global population.  while I will concede that a standing military is important for the defense of a country's national borders (my opinion of national borders is a discussion for another day), war profiteering - and the human fallout it creates - is one of the worst faces of evil, which the US has been wearing for far too long, as well as being one of the biggest problems we are facing with our current political crises.


with so many of our citizens going without basic human needs, which I (and many others) see as basic human rights, and more being taken away from us everyday, why would anyone of good conscience choose to support profits over people?  or child 'detention centers' for immigrant children illegally and brutally separated from their parents - while running to escape situation perpetrated by the US to begin with?  or raising the prices of life-giving medications out of range for the people who rely on them?  why are we continuing to suffer under institutional/cultural/structural racism?  why are there still Black and Brown bodies locked up in for-profit prisons on marijuana charges while white people are enjoying 'cannabis tourism'?  WHY on this big beautiful planet bursting with abundance is there even one child who can't access clean water?  why is anyone still starving?  we have Long since had the knowledge and resources for Every Single Person on this planet to not only survive but thrive, and the only thing keeping us from collectively evolving into a civilization that can achieve great things by working together is that we are still mired down in the mud due to the shockingly monstrous greed of a few ludicrously perverted individuals. 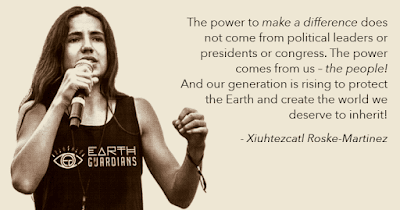 as usual, the kids are leading the way.  any and all parents (All adults!) who love and respect the lives we've been given to care for does themselves proud when they not only hear what their children are saying, but listen to them, and help amplify their voices.  we have a responsibility to give them the tools they need to move us down the road towards a better and brighter future for all people, no exceptions.  that means those of us who have had it easy and feel comfortable in our everyday lives are going to have to learn to be uncomfortable for as long as it takes for us to get there.  'peace' is not a nebulous magical archetype for us to dream about from the comfort of our cozy couches, clicking away at our laptops - it is a concept that goes beyond the absence of war.  it is the ability to constructively manage conflict, and opportunity for change through understanding, a commitment to learning from differences and nurturing all individuals.  it requires tolerance, kindness, respect, consideration, morality, and justice.  it requires us to 'do the work'.  I haven't done nearly enough in my personal life to promote peace other than doing this bloggy thing, attending a few protest marches here and there, and learning through my kid how to be a better me.  and through doing this bloggy thing, I take the time to look up and read articles and definitions, learn about the leaders in the field who are doing the heavy lifting, and connect with others who do the same.  it gives me hope.  and sometimes, in the day to day world of dishes and laundry, and struggling to earn enough as a single mom to keep a roof over our heads, that's the best I can hope for.  I can do more, though, and this is my yearly reminder to make that part of my daily practice.  I hope someone out there might read this, and feel the same.  ☮