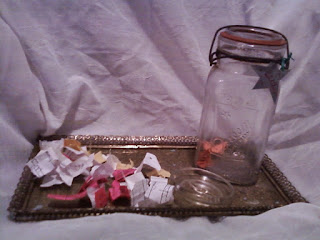 we emptied and read our entries into our memory jar a bit early this year (we usually wait until New Year's Eve, or thereabouts) because we were flopping around the house all week trying to stay occupied so as not to get bored and get on each other's nerves too much during the Teen's winter break from school.  we had been remarking to each other of late how empty the jar is this year, because neither one of us made filling it a priority.  still, we went through the motions when we did, and here's the list of what we took the time to memorialize:

Shavuot soup (not sure what this was, though I know it had to be a dairy dish in accordance with the Jewish holiday)

perfect summer days in the Catskills (no need for an explanation!)

Sly and the Family Stone vs. Parliament Funkadelic (teen's gig)

Goods delivery! (the ONLY place that delivers food to us, and only on rare occasions)

SLAYER! x 3 (he went to see them with a friend, without me)

Fortnite season 5 (thanks G for the battle pass)


food, friends, fitness, live music, and a recognition of perfect summer days isn't a bad year at all, without even adding in the Teen's video gaming, and the joy of youth over cancelled school days.  no matter that the list is short, or that the folks who have graced it in the past turned out not to have a place on it in our future, and knowing that will most likely repeat itself this year, due to miscommunications (not by me - I communicate rather effectively, and go out of my way to make sure I am understood), and a general lack of respect for me and mine by those I would have thought above such foolishness...but alas.  we move forward, no?  and look to the new connections we will make in the coming year that will be better suited to helping us move harmoniously into our future.

there are some things we forgot to put in the jar, like my birthday last year, attended by several of the people who have definitively shown me since that our friendship wasn't worth their time moving forward - but it was still a fun party where I felt surrounded by love, and I certainly don't want to negate that, or the people who were there with whom I still enjoy camaraderie.  also the Teen's birthday, which was just a simple sleepover with his one friend, as he desired.  he played (and I attended) several gigs with his music school - a 'Zombie Prom', a Black Sabbath show, and a 'New Wave of British Heavy Metal' show.  I even got in on the action and played a gig of my own (which was awful, and I hated every minute of it, but I got out of my comfort zone and tried something new, so yay me).  we went to Israel (the Teen's first trip - I've been many times, but not in a long while).  we celebrated Hannukah as best we could without money to give each other material gifts, but we did honor certain principles each night that I find more important than consumerism.  I made both 'Romani Soup' and Minestrone soup for the first time...we had friends over for dinner (once, the entire year) and my 'bestie' came up for a night or two (which I try to appreciate more than be mad about because I want more time with them more often, but...life).

it was a really rough year for me financially, and I had a bunch of people help me out with cash for food, heat, car repairs, and ticket money for gigs, while also gifting the Teen a new-to-him phone, and some comfy pj's for our winter holiday - SO grateful for all of Those blessings, Thank You!  a mystery challah showed up at my door on the last night of Hannukah, and while I know now who left it, it was a sweet gift to come home to that night.  I 'officially' launched Mysteriam Ink, engaged in activism and social justice work mostly (but not exclusively) related to issues that effect the Romani community, the Teen started high school, I was able to get my hands on some old photographs of my ancestors, and I uh...engaged in some 'adult activity' for the first time in too many years.  we all rode the wave of these trying political times, and while I don't tend to talk politics, here, I would be remiss if I didn't at least point out that this year, many of us are...let's say unhappy in regards to the current monstrosity of an American president and his administration.  there's a terrible world going on outside these walls, and frankly, I don't want to go out in it alone, so I'm grateful to those who stayed friends with me, and spare little to no thought for those who chose to show me their worst (though I do hope they manage to work through their issues for their own personal growth and development).

on the flip side of that, there's an incredibly Beautiful and Exciting world out there, and I'm looking forward to enjoying more of it, and watching my son learn to recognize and engage with it's gifts each day.  we don't have it easy, but we could have it worse, as we're very well aware, and we navigate our low points with whatever grace we can glean while sitting back and relaxing when the sailing is smooth.  so Happy New calendar Year to all friends, fans, and readers of The Unused Portion!  thank you for being here, subscribing, liking/following on facebook, commenting, and generally putting up with the rants and raves I dump out of my head, convert to pixels, and share with you.  sometimes it's a gift, sometimes a curse, but always worth doing for myself.  I hope others get something out of it, too. 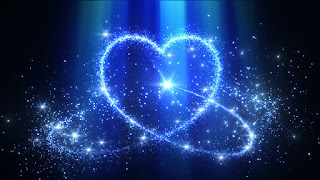 
*New Year's Day update:  I loved The Doors when I was in high school, and I often think of the first few lines of Jim Morrison's "Ghost Song" (part of the first track, "Awake") on their An American Prayer album first thing in the morning.  this is what they say ~

"Awake...Shake dreams from your hair, my pretty child, my sweet one...Choose the day, and choose the sign of your day, the day's divinity...first thing you see..."

I woke up this morning - 1/1/19 - at 7am, to the sounds of my cat puking on the Native American poncho covering my desk chair, on which she was napping.  and I just washed it, too.  lovely...great omen for the new year, huh?  at least I know it will get better from here!


consequently, I also learned that this album was released 7 years after Jim's death, and 5 years after The Doors broke up.  I can't just stop loving it, but that fact - coupled with the new knowledge that Jim had his Own plans to release this work with artists that were not The Doors - really threw me for a loop, and made me feel like I've been lied to all these years.  not a good feeling, and I'm angry at the remaining three Doors in retrospect.  come on, 2019, you've Gotta do better than this for me!