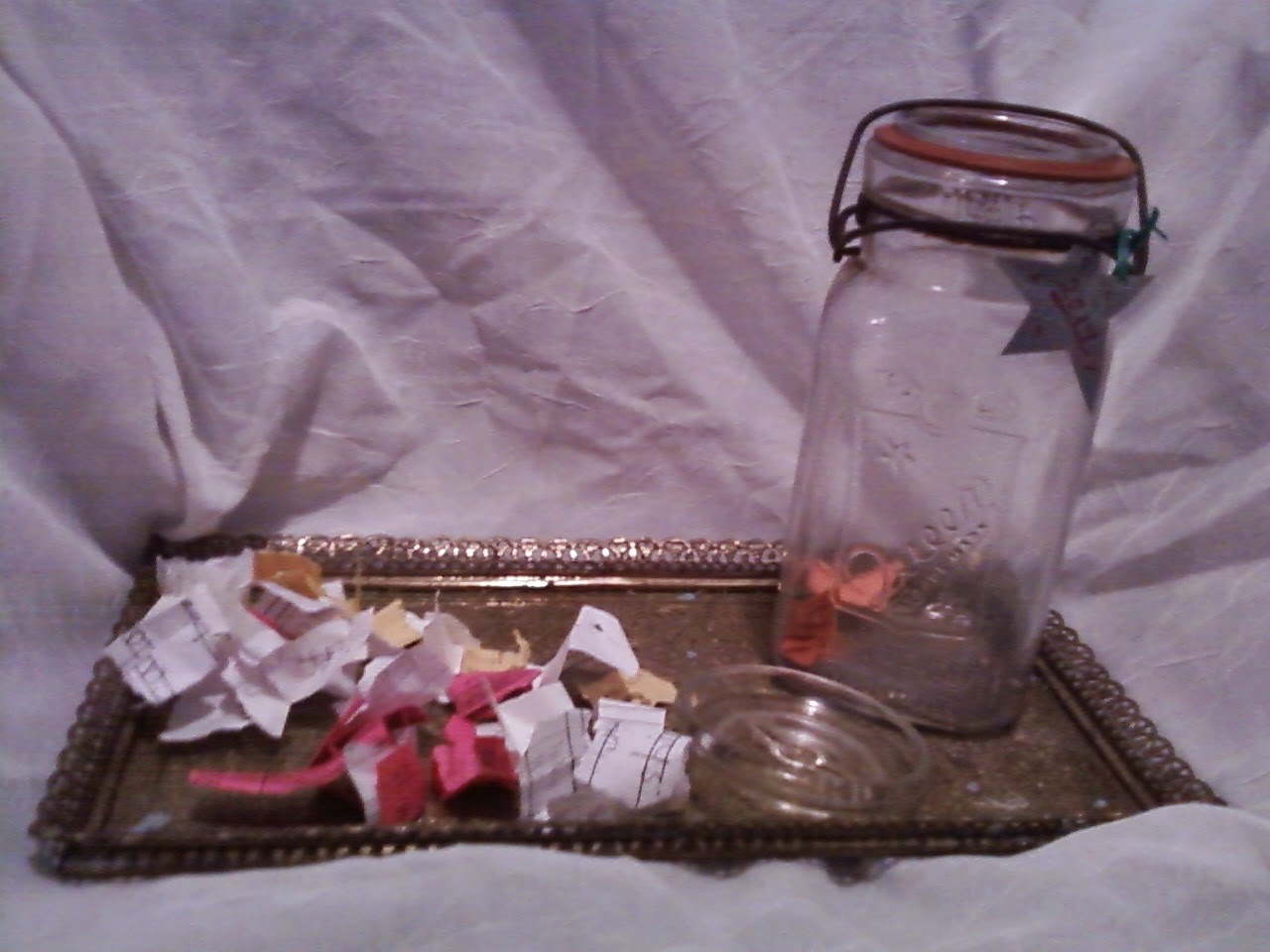 Last January, sometime around the 1st, the boy and I decided to take one of our many empty glass jars and fill it with our best memories from over the course of the year, then read them out to each other on the following New Year's Eve, 2015.  Well, we didn't do it on New Year's Eve, because the majority of our household items were still packed away in storage at that point, but we did unpack that particular box tonight, and found our jar, so we did the thing, and I decided it was fun enough to share with all of you.  foreshadow - at one point during the fall, we were walking down a wooded trail, and we passed under a large branch hanging from another branch of the tree, and thinking it might fall on someone and possibly hurt them, I reached up and grasped it, gave a slight tug, it came down on the boy's head, and he began to cry, briefly.  He was alright, though I felt bad (obviously), but we swiftly moved on along with our day.  Later, when we got back home, I thought it might be amusing to write the experience down for the memory jar, just to throw in a twist:  "what?  that wasn't fun, that sucked!  you're weird, Mom!"  so I wrote 'the day when my mom dropped that branch on my head' on a slip of paper, folded it up, and dropped it in the jar to be discovered at a later date...here are our best memories of 2014:

Frank Zappa show
today I saw half levitating ice
today I got my first electric guitar
today I played my first day of my show
today I played my second day of my show
(me) ROLLING STONES!!!
today I played at Deitz Stadium
today I played my best of season show
archery (x 2)
(me) L. B.'s Birthday!
J's barbeque
today I went to MOMATH  (museum of math)
today I did a skyscraper class (Center for Architecture, NYC)
colony 36!  (live action role playing game)
punk day 1
punk day 2
crowd surfing at punk
(me) PUNK!  both nights!
mom's enlarger
Robin Hood!
(me) Today was a good day
the Jersey Shore (x 2)
(me, impersonating him) the day when my mom dropped that branch on my head

as we took turns reading through our moments, I kept wondering where the branch scenario was going to pop up, which one of us was going to pick it?  slips of paper were shaken from the jar, read out, but no branch story.  I began to wonder if I had really put it in the jar, or if I just imagined it.  finally, there was one slip of paper left, and I was pretty sure I knew what it was going to say.  he grabbed for it and read out, "the day when my mom dropped that branch on my head", frowned, looked at me, looked back at the bit of paper in his hands, and looked back at me.  I, of course, was laughing.  I thought it was awesome the way he read it out, because it was first-person, even though he didn't write the note!  he caught on and began to laugh as well.  "You're so weird, Mom, why would you do that!" he giggled.

"Hey, I've been waiting several months to watch that joke play out - do you remember that day?  Sorry again, by the way, but that was so totally funny!"

so worth it.  soon as the jar was empty of last year's remembrances, the boy put two slips of paper in for this year's memories already.  guess I'll have to think back over the past few weeks since the year began, and see what I can put in the jar for next New Year's Eve.  looking forward to filling another jar (and year) with moments of joy shared with my best guy.