I popped into ABC Wednesday to see what was up over there, and it turns out, they're shutting down soon, so I'm glad I checked.  Right at the beginning of the alphabet, too.  So I'm gonna jump in this round, and think of something that begins with A...


A is for Alpha, agrimony, aluminum.  Arsenic, antimony, agriculture, aardvark.  A is for artist, art, and arterial...airplane, aeronaut, and ardor.  Alaska, Agartha, asparagus, Agrippa...Aesop, aged, apparent, aster.  A is for Aleph.  'A' my name is Annie...A is for Apple.  A is the beginning, the first point following the subject in an outline.  A is for Angel. A is amusing, aggravating, and apocalyptic.

A is annoying.  It's not A's fault I've got nothing.  I even looked back through my blog to see what I did for A last time I played, and you know what?  I never did one!  I seem to have popped in at I and dropped out at W.  Weird.  So I'm not sure what to go for, here.  Roger did Alpha-Bits...should I write a poem?  Post a picture?  Define a word?  I was looking for something new to inspire me this morning, so maybe I'll google A and see what comes up...

The first thing to come up (after the ads) was the Wikipedia for the letter A.  Under images, a big black blocky A.  That's not inspirational.  I need more...a YouTube search (for A) brings up 'Spider bursts out of a banana', followed by an aluminum cast of a fire ant colony.  So random...where to, now?  Handmade books were on my mind this morning, and there's a fresh set of folios folded on the table right next to me, ready to be glued.  But 'books' would be B...is there an A book?  A books...AbeBooks!  Look what a lovely welcome they had for me!

I discovered AbeBooks while I was working on my thesis, so let's call that no less than 5 years ago.  They had some rare selections at interesting price ranges, really nifty stuff.  Let's see if they have any of that now:  well, there's a 'weird book' room, which is sort of interesting, but not what I was going for...ah!  Found it!  Here there are books bound in cowhide, ivory and calfskin, silver/gilt/velvet/rubies, embroidered silk, inlaid wood, snakeskin, mulberry bark, and other mediums, some rather curious.  Which led my ramblings to another A, Anthropodermic bibliopegy.  Kind of gross, but go ahead and click the link if you don't mind gross things...I'll  leave it up to you, but it did make me shudder, even though I think it's kind of cool, and puts me in mind of The Pillow Book, though in a much less romantic way!

Hey - check out this little book that's another kind of A - adorable!  Well, that's all I've got.  I'll think of something better for B, or maybe I'll just do some more books, who knows. 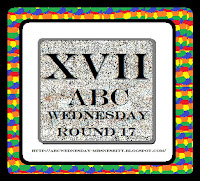