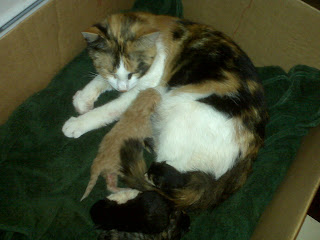 Sorry, I don't really care for The Beatles all that much, really (although I can appreciate their place in the history of 20th century music, and I HAVE been known to tap my toes or sing along...), but I couldn't resist! Anyway, it's been a busy week, so let me start out by saying KITTENS!!! Here's a little miracle that took place in my house on Thursday - Kaia, the sort-of homeless kitty (who was pregnant) showed up at my door Tuesday night, soaked from the rain, hurt from a fight, and looking pretty ready to pop, so I took her in, fed her, and made a nice place for her to relax and give birth. Which she did. Not in the nice little spot I made for her, though, in my bed! Eeew, I know, but I went straight to the laundromat when she was done, and my blanket is fine! So it looks like I'll be caring for her (and her babies) for the next 8 weeks or so...Anyone want a kitten? They are awfully darn cute! 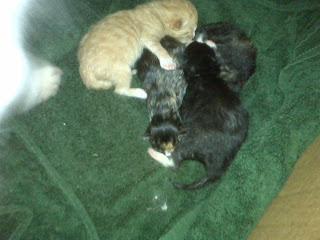 So, that's been pretty fun and exciting on a daily basis, not to mention that my son is in love with them, and wants to keep them all! I keep insisting to him that we will only keep one of the kitties, and maybe Kaia, herself, but we will have to wait and see how things pan out - hopefully, the process of giving them good homes won't be too heartbreaking for him... Oh, and the story on Kaia is this: she was given to my BF as a too little kitten (shouldn't have been taken from her mom), and ended up at my place for 'kitty-sitting' when BF ended up in the ICU for a week. She went back to him for a few weeks, until he, um, got arrested, then came back over here. I took care of her until she started attacking my son, at which point, she ended up at the downstairs neighbor's. He mistreats her, so when she felt ready to give birth, she showed up here, where (I suspect) she knew she'd be taken in, fed, and cared for. I'm glad she did, and she's been a regular sweetheart to me (and my son) since. I have to seriously consider whether or not I can give her regular pet status, although I will most likely keep one of the kittens. I have time, yet, so I haven't decided! 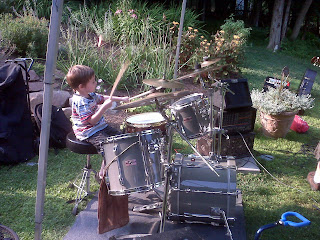 In other exciting news, BF, the boy, and I went to a wonderful barbecue this past Saturday hosted by an old buddy of ours, and his newish wife. We all had a blast, enjoying home-cooked deliciousness from our hosts' bountiful garden, and my son got to indulge his love of drums while the guys were setting up to play! He even got to jam with them for a bit, which made him feel pretty special, but ultimately, I had to drag him off the stool so the guys could do what they had come to do! The little guy was pretty pissed off, and definitely took a few minutes to channel his inner rock star by pouting and sulking, but he got another chance to play a little later on - thanks, guys! My friend whose drums these were made sure to tell me that I should definitely make the trip down to Sam Ash (music store he is GM at) and get my boy a set of skins post-haste, as he exhibited some serious talent (mama gushes with pride)! 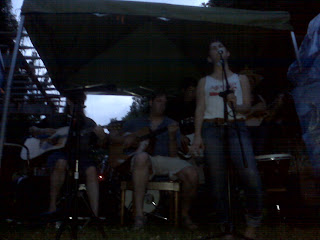 I can't tell you how nice it was to see some of these folks, some of them for the first time in almost 20 years! The food was superb, the music incomparable, and the good vibes from good people felt incredibly special and renewing! That's BF, by the way, in the last photo - taking it all in and letting it fill him up with the kind of joy we used to know in our (ahem) youth. He closed his eyes, presumably to let the music (and the sound of this young woman's voice!) wash over him, and erase the hardships of the years, and just feel like we all did back then. That there was no where else to be, and nothing else to do, then listen to these guys play, and be happy. It was 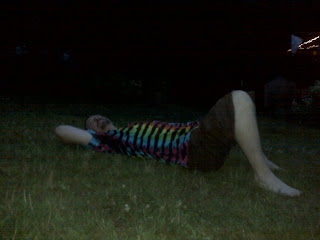 probably one of the best times I've had since I moved to NY - the kind of great time where old friends hang out at the same place we all did back then, except now we have our kids with us, and they are meeting each other, and running off together to play. I want to hold on to that feeling as long as I can, and longer. I want to remember how to be joyous, and to feel free...
Posted by Mama Pajama at 11:16 PM