as per my cultural norm, I'm not really choosing to get into the religious aspects of the holiday, more at the tradition, and passing it on, in my way.  I thought I'd put together a Seder plate (because we do actually own one, though it looks like something that belongs in a Hebrew school kindergarten class), and what I think of as a Seder:  the preparation & planning, the ritual story, the meal, the day to day of the actual 'holiday', & the switch back to 'regular' foods.  I'm on the prep & plan stage at the moment, but I'm going to do an abridged ritual, and 'my kind' of meal:  matzah balls & soup, soup nuts (couldn't find any), gefilte fish (we skipped it because he won't eat it, and I didn't need a whole jar just for me), salad, chicken skewers, roasted veggies, some kind of chocolaty dessert, and baglach.  I have my great-grandma's baglach, and my Sapta's (grandmother's) matzah ball recipes.  gonna marinate the chicken, and make tzadziki for dipping - which is mixing dairy and meat, and breaking the number one rule in kosher food practice...but I suppose I could think of something else before the meal needs to take place.


so the prep/plan wasn't really all that much, to be honest, because in my head, I see my mother beginning her preparations two weeks out, as we used to switch out the whole kitchen for a entirely different set of dishes/cookware/utensils, and have 40 people at the table, which is A LOT of work!  since in my house, it's just the two of us (the teen and I), and I had no intentions (no ability, really) to go 'full on' the way my mom did, we just pulled everything we would need from the cabinets - a pitcher for hand washing, the Seder plate, the recipes, my trusty Haggadah (that had to be stolen from my family's coffers of Passover items several years ago, because I am not allowed access to my ancestral heirlooms), candles and holders, kiddish cups for the wine.  as far as the meal/foods, I needed a horseradish root, fresh parsley, matzah meal, matzah, a cucumber for the tzadziki, a bottle of Manishevitz (the Kosher wine I grew up with), a shank bone, some soup nuts, and some kind of dessert, which simply required me to make a list, and go to the store.  easy. 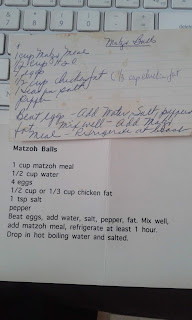 I had leftover chicken soup in the freezer from the week before (technically Not kosher for Passover, but I work within my parameters) which I thawed; and made matzah balls in some of my veggie scrap soup so they were both delicious AND nutritious!  made a salad, marinated the chicken before skewering it and broiling in the oven, made the tzadziki (I couldn't come up with anything else.  I would normally do a satay/peanut sauce but peanuts are not kosher for Passover, and I didn't have sunflower/almond/cashew butter with which to substitute...I also considered making a pseudo-pesto, since I Did have parsley and walnuts and could substitute nutritional yeast for parmesan, But...also Not kosher for Passover, so unkosher yogurt dip for the chicken it was).  I even found my once-beloved chocolate 'lollycones' (and a few other dark chocolate/coconut delights) for dessert, and got the teen the horrible 'fruit slices' which are pure sugar, that I won't eat, but he enjoys.


so - with everything cooking, cooked, prepared, the table set and us as ready as we would ever be to 'do this thing', we began.  we did not do a 'chametz hunt' the night before, because I didn't even bother to remove all the bread and 'leavened' food items from my house, mostly because we'd be needing it after the two nights of Seders I planned on conducting, and there's simply no way I'm prepared to do the full week of the holiday the way my family did when I was a kid, carrying matzah sandwiches to school in my Star Wars lunchbox (there's a story I wrote about it once, maybe I'll post it here eventually).  we went through the Haggadah pretty quickly, skipping over the more verbose and less relevant parts, stopping for the prayers, to sing the songs, and enact the rituals.  then we ate our delicious foods, finished the Seder, had dessert, and sang some more!  as always, we made it fun.


in the midst of preparing for all this good Jewishness, I suddenly remembered that my father died right before Passover, and that this year was the 20th anniversary of that sad occasion.  in our tradition, when a person dies, we sit 'shiva', which is a mourning practice where we all come together at the home of the bereaved, and say prayers for and remember the deceased over the course of 7 days.  since my pops died right before a major holiday, this ritual is not observed, which I found very...'like' my dad, as he wasn't fond of sitting shiva in general, and would have laughed at the idea of the rest of us doing so for him.  but we didn't have to, and that seemed fitting.  his death kind of ruined the holiday for me for awhile, as it was always one of my favorites, and for years I couldn't sit through a Seder without becoming seriously emotional.  I think it was just about 5 years ago that I re-engaged with it, when my son decided he wanted a Bar Mitzvah, and started attending Hebrew school.  so - here we are.  full circle.  I truly enjoyed the Passover Seder we made together as a family - just the two of us, as we are.  it felt good and right, and I'm looking forward to doing it again next year!


I found I needed some guidance in remembering what was Kosher for Passover, and what wasn't.  this is the resource I used for help: