the landslide bringing me down

you know, I'm not much of a Stevie Nicks fan, though I've always liked the song "Landslide"...I kind of hold her responsible for millions of hippie chicks in lacy gowns thinking they can appropriate an ethnic slur against Roma people as a lifestyle and culture...but if she didn't know, she didn't know, I guess.  it's 2022 now, and we should all know better.  apologies are being made.  awareness is being raised.  it's not ok anymore (someone alert Cher, as well, please).

I watched a video this morning of Stevie singing "Landslide" in front of a video memorial for her dad who died in 2005, and of course it made me cry.  lots of things make me cry now.  used to be, I didn't cry at all, and was proud of it.  then I learned to not be such an impenetrable stone all the time and to be proud of the fact that I had enough heart and soul to cry.  then I had a baby and couldn't watch tv any more because the news made me cry...and commercials.  now, as I approach what I consider to be my 'official menopause date', I can and will cry about anything and everything, because my heart is simply broken completely open by the wisdom and humility of life (my personal Kabbalah).

I'm dropping my son off at college tomorrow.  that's...huge.  on a number of levels.  first off, I've raised my baby alone from the moment of his conception.  I will not negate his father's contribution of the minimum amount of child support required to be in compliance with the current laws, but to be clear, his involvement truly has been minimal, for which I have apologized to my son profusely.  my son has very little family other than me - he didn't really get to know my Sapta (maternal grandmother) before she died, and has little memory of her, though he does have fond recollections of my Zayde (maternal grandfather).  my dad and his parents were long gone before my son was born, and though he had my mom in his life until she passed last year, we weren't always on good terms with her.  there was a brief minute when my brother allowed his three kids to accept their little cousin as a member of their family, but he cut what loose ties he had with me/us, irreparably damaging those relationships, and they will most likely take more work than most people care to do to repair them, so I don't have much hope that they will be.  my point is, this kid has mostly had to figure out how to be in this world on his own, with his closest non-Mom people being his guitar teacher, his show director, and his wrestling coach, in that order.  so...yeah.  a mostly solo project with some honorably mention-able supporters. 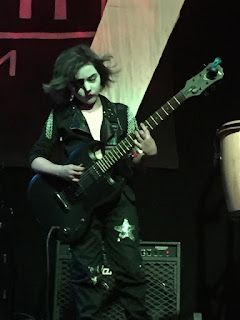 do you know how I got my son into the prestigious and expensive Paul Green Rock Academy?  I emailed Lisa Green and offered to do any number of things for her in exchange for a scholarship - write, edit, proofread, take photos, answer phones, scrub her toilet with my toothbrush.  so she agreed to a meeting with me where she explained that she had people doing all those things for her, except scrubbing her toilets, so she let me clean the building in exchange for my son's lesson and show fees.  and not only did I do everything in my power to go above and beyond for the Green's and their Rock Academy, my kid did, too.  when Paul and Lisa left, and Jason and Acacia took over the school, we didn't know if he would be allowed to continue, but they generously allowed him to stay with the program on a full scholarship until he graduated from high school.  I don't know who pulled what strings behind which closed doors in order for that to happen, but I will forever be grateful to them for that gift.

so here we are, after 18 (19 counting my pregnancy) years of this journey, in the same place we started - homeless in Vermont.  how did we get here again?  well...as a single mom making minimum wage, I can't afford an apartment anywhere in the United States on my paycheck, so I jumped at the chance to apply for a section 8 voucher, which has almost saved us from homelessness over the past decade, though not entirely.  a lot of landlords don't like doing the paperwork that section 8 requires, so refuse to rent to voucher holders, which is illegal, but there are a million ways around it.  one of which is to count on the fact that voucher holders don't have the money/time/knowledge to take them to court, and if they did, and they won, they still wouldn't have a place to live.  it's a lose-lose situation.  I had been living in Vermont for over a decade when my son was born, and when he was 3, I took a chance on moving to NY to be closer to my family...it didn't work out.  we stayed in NY for another decade and more, as we simply moved north near some friends of mine from the 'old days', though after not so long, I found myself regretting leaving Vermont at all.

Vermont was a dream I would return to after the boy was grown and didn't need me anymore.  Vermont was where I would go 'next', as with me, there's always a 'next'.  there were plenty of times I would have gone before now, but my son wanted to stay with his class in school until he graduated, so I stayed for him.  I cooled my hot feet and stayed put to the point of breaking, but I made it.  we still had to move fairly frequently as our rentals kept getting yanked out from under us by unscrupulous landlords raising the rent past my affordability, the State taking over the land through eminent domain, or other unscrupulous landlords taking advantage of the pandemic to sell their house/my apartment to an airbnb developer further adding to the issue of local workers not being able to find or afford housing in the communities in which they work and live...  but we managed to stay housed for a good stretch, and I did spend a good amount of time looking for apartments in VT before we pulled up roots in NY and moved, and though I wasn't able to find anything by the time we had to leave, I did have a place to land when we got here.  or so I thought.

what do you do when someone you've known for 20 years and more calls you up one day and says they're doing really well with their recovery?  that they're housed, in school, taking real steps towards getting their life back on track, and seeking employment?  what if they're really excited to hear you're coming back, and want to help support you on the way?  what if they see you not finding housing and offer up their living room as a place to call home for a minute, until you find what you need?  am I a poor judge of character?  do I make the wrong friends?  trust the wrong people?  well, let's look at my son's dad - 98% absent during the child's life, so much so, that when my young man screwed up his courage enough to ask his stranger of a father for a couch to crash on for a week (yes, dude lives here in Vermont), he wasn't overly welcoming, nor did he offer any financial help.  loser?  maybe.  I don't want to make excuses for him; I've been doing it for far too long for no good reasons, including my own pride, and his skill as a guitar player.

so our crash pad crashed and burned when it turned out my friend wasn't as in recovery as she thought she was.  she had a relapse, and used it as an excuse to behave in an abusive manner towards me.  the fact that she chose to take her relapse out on me when all I'd ever done was be a good and loyal friend to her was unnecessary and frankly unconscionable.  she's fooled me more times than it should take for someone with good self-esteem to walk away from.  and I regret letting the dreams in my head let me believe I could trust that someone was as loyal and honest as I am, though I know from years of experience that's rarely true.  I take the giving of my energy in relationship very seriously, and I'm often hurt by folks who enjoy more casual interactions, as I tend to connect pretty deeply, rather quickly.  and I'm finding that as I attempt to reconnect with folks I thought of as 'friends' here in Vermont, that I guess to them I'm more of an acquaintance, and there's been a 'no-show' of those I thought were 'my people' (some real help has come from unexpected places, too, I must confess).  so what does that tell me about moving forward here?

nothing I didn't already know, I guess - we're all just hurtling through space on this rock alone.  ever.  always.  and that's fine.  I'd just like to plant a flower garden, watch it grow and die, and come back again.  I want to write poems and prose, and create images.  I want to knit and sew and crochet - craft art with my hands again and be alone with the silence of late night/early morning hours.  I want to walk in nature, and be soothed.  I want to share my creations with others who create.  I want to hear from my son that he's doing well in school - that he's learning how to earn and manage money in a way that will bring him and his hoped-for future family more ease than his upbringing brought him.  "may he do better"...every parents' prayer.

I used to travel when I was younger - just pack up my few belongings and my cat, and live on the road in my car.  it was a lovely lifestyle when planned for.  falling houseless because of broken systems built to keep women like me down is less fun, but again - can be navigated smoothly by people like myself who are wise in the ways of travel.  when I have to drag an unwilling and angry teenager and his fancy cat along?  it can get really tough, but I'm using All the tools in my kit to keep us buoyant in proactive ways, while doing my best to organize these experiences with my overtaxed mind to share with people in a way that encourages them towards helping me out financially.  I need help paying for gas, insurance, storage, cat supplies, and whatever my son may need for college that we didn't already think of, and for pet-friendly hotels/motels/b&b's/accommodations until I can find housing.  I'm really good at writing, editing, proofreading, and reading tarot cards.  please feel free to ask me to perform any of those tasks for you in exchange for any monetary donations.  we can work out a value together.  let me know how I can help you help me.

my gofundme, organized by some friends:  https://www.gofundme.com/f/miriam-mysteriam-and-teen-need-a-homehttps://gofund.me/835d9ce3https://gofund.me/835d9ce3https://www.gofundme.com/f/miriam-mysteriam-and-teen-need-a-home?utm_source=customer&utm_medium=copy_link_all&utm_campaign=p_cp+share-sheethttps://www.gofundme.com/f/miriam-mysteriam-and-teen-need-a-home?utm_source=customer&utm_medium=copy_link_all&utm_campaign=p_cp+share-shee