since I got a new tarot deck (This Might Hurt) I'm gonna get to know it better by going through each card in each of my decks, to compare and contrast them, in no particular order (ok, maybe in some semblance of order), and in no particular time frame.  how's that?  sound good?  cool.  I totally did not randomly chose to start with The Fool, because where else do you start a journey?  well, some of you might like to plan and pack and save, but I just...jump and hope a net will appear.  so it seems of our Fool, hey?

here's why I love Isabella Rotman's version:  first and foremost, the ambiguous gender/gender neutrality of the archetype.  in joining a tarot group to find community to be in during the pandemic after having been a mostly solitary practitioner for most of my life, the very first thing that struck me was the lack of diversity in our (the group's) tarot tools, and I wanted a new deck to reflect my new understanding of what a deck could be, immediately.  and this Fool is perfect.  they've got they're bag, they're not looking where they're going, they're smelling a rose while about to step off a cliff even though their little dog is warning them...the patched pants, the bird on their shoulder, the budding tree, the hand...perfect. 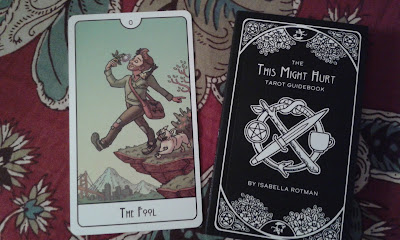 for comparison, here's a look at The Fool from Fergus Hall's Tarot of the Witches - my first deck, the one I've been working with since 1984.  this dude is peeking out underneath his blindfold as his vicious little dog rips his pants in imitation of the Coppertone baby's pose, while he tosses eight coins to the wind, and lets the other hand swish in the breeze.  even though he's got both the sun and the moon suggesting the ongoing opportunity for endless experience (and a heart on his cheek, and a cheeky grin), he's still going over that cliff in his adventurously frivolous colors.  I always wondered if he'd manage to grab on to the little tree to save himself... 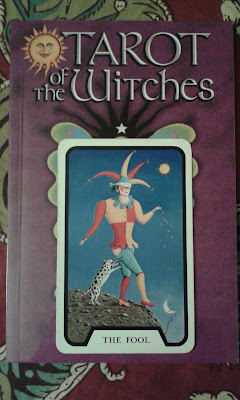 in the oh-so-white and fairy cartoon-y Tarot of a Moon Garden deck, we have this...fellow?  entity..?  archetype.  well, they seem to be floating above the Earth, with their little dog seemingly happy about it, possibly just content to chase the bubbles and baubles appearing around the Fool's ballerina-slipper clad feet...all three of them.  dancing between the dawn and dusk?  it seems half of this person is steeped in the light of the full moon at night, while the other half is parading through the noon of a sunny day at the same time.  and so many hands!  four of them, holding a paintbrush, a poppet, a butterfly net, and a pomegranate.  there's also a heart on their one sleeve, a star on the other - bells on the colorful skirt, hat, and shoes; a butterfly with antennae curled into a heart; a crescent moon over the eye on the 'daylight' side of the body, a star over the eye on the 'nighttime' side.  there's a lot going on here to process. 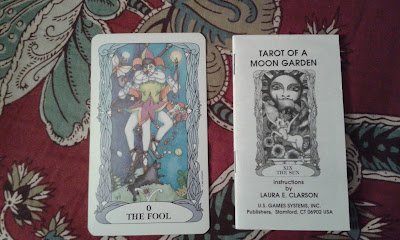 The Lover's Tarot, which I like because it's HUGE, consists of only the major arcana - a fun deck for a fun reading!  I've used it a few times for community readings, but no one's asked me for it for a personal reading, yet.  check this guy out, though - he's like the poster boy for pasty white noble-whatsis and caped colonizers.  is that a little fish purse?  seriously?  I want this guy to fall off the cliff, but it doesn't even look like he's trying...just leaning in with that one knee, and somehow messing up the carefree wave of the right hand with an awkward gesture to match the odd stance.  and his poor, sad-looking dog!  it seems to me like this Fool's belt, cape, and red tights are the only ones excited for the possibility of adventure; that the youth wearing them is too naive to know that the city down there holds any promise for him under that oddly flat, yet inspiringly illuminated sun. 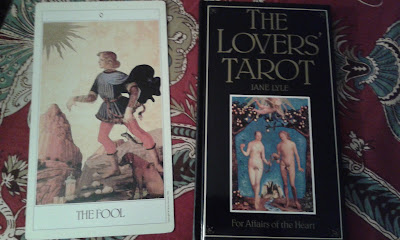 it's taking me some time to feel comfortable working with the HooDoo Tarot, and that's as it's meant to be.  so who is The Free Man?  he comes with New Testament quotes and a plant correspondence, neither of which I'm familiar with, and while the one is basic enough, the other required me to look it up and find out that I know 'Jimsonweed' as 'datura'.  learning already, not bad!  there's no cliff here, or a little dog warning this man of any danger, but we're told that carrying a jar of dirt away from this particular tomb is a daring act of purpose or lunacy.  there's no carefree toss of a hand, here, no budding tree on the edge of a day, just a wise knowing, and the fatigue of that burden.  he seems to show us not how to face up to our fears, but to ascend past them through the fiery belief in our own purpose. 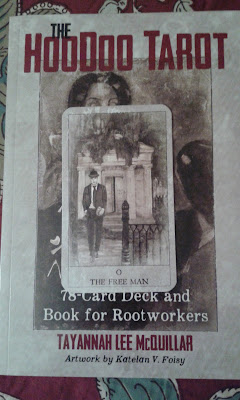 also, I couldn't resist gifting myself this adorable pocket edition of The Wild Unknown by Kim Krans that comes in its own tin - so cute! - so I'm full up on decks at the moment (still want a Thoth deck, though)!  what's fun and unique about this deck is that to my mind, it doesn't follow the 'traditional' art framework at all, and instead, encourages us to find something new in the interpretations of the symbols by relating them to nature and the outdoors.  how to represent The Fool without the regular trappings?  how to communicate that sense of spontaneity and adventure, danger, and heightened awareness without a cliff, a dog, a flourish, a bag of tricks, bright and colorful clothing, a budding tree or flower, mountains or a city in the distance?  draw a baby bird on a tree limb about to take its first leap of faith.  do you feel like you understand The Fool a bit more, now? 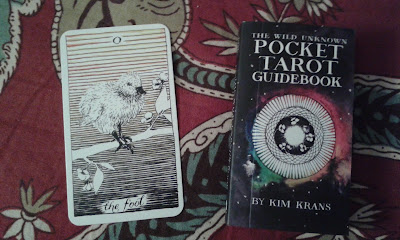