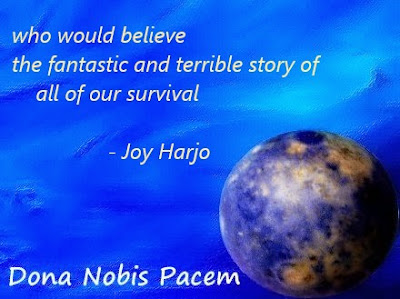 as I struggle to find my own personal peace during this particular period of my parenting journey, I wonder what there is to say about our collective peace around the world.  what has this year brought us in terms of coming together and working as a team to achieve some worthwhile goals?  can we?  have we?  do we?

like most people, my mind tends toward the negative - the horrific residential schools that tortured and killed so many innocent Indigenous children in North America.  the attempted insurrection at the Capitol building in the USA following our presidential election.  how Black Lives Matter, yet still don't seem to get the justice they deserve.  how Missing and Murdered Indigenous Women (and other Black and Brown women) aren't given the attention they deserve.  which is to say nothing of the ongoing pandemic, and the resulting economic instability...corruption continues to run rampant as democracies crumble, and iniquity grows. let's not forget to add what's quickly becoming a climate emergency to the list, too.

given this recipe for disaster, it's interesting to note that the Global Peace Index reports that while peace continues to deteriorate around the world, it supposedly decreased at a smaller rate this year than usual.  well, thank goodness for small miracles, hey?

it constantly seems to me like the world is on fire, and I cannot understand why 'the powers that be' refuse to see the simple truth that most people living hand to mouth inherently 'get' - that we need each other to survive.  I know the uber-rich think they're just going to shoot themselves off into space and therefore avoid the whole issue, while ignoring the fact that the money they put into their little space-trips could feed entire nations for a year or more.  look at whose net worth increased by the billions during a time of global strife and you will know where to point your fingers when war/famine/disease land on your front door.

ugh.  there's so much to be disgusted by, so let's look at what (if anything) got better this year:

I don't know...the info varies depending on which site you visit, so I'm not going to back any of these statements as true, but I've posted some links and a few articles (above and below) so you can check them out for yourself.  for my self, I'm working to increase my own peace by tending to my spiritual well-being, and amplifying the voices I feel need/deserve amplification (click those links!).

how are you creating peace in your corner of the world?  do you believe housing is a human right?  how about access to clean water and food?  education?  health care?  trans rights?  sex work being real work?  if yes, right on!  if not...why?

Pessimism Makes The Headlines But The World Is Getting Better

23 charts and maps that show the world is getting much, much better