I've been so goddamned busy and flat out that I haven't taken the time to be with myself for over a month - here it is halfway through April, and I need a self-inflicted ass-kicking, again.  I was riding on such a wave of celebration, as the Winter holidays are followed closely by my and the boy's birthdays, right after which I graduated from college, then went away with friends for the weekend, and had other occasions for making merry as well.  Then it was the end of March/beginning of April, and I finally had a minute to stand still and realize that spring break and Passover were right around the corner, and the bottom fell out of my sanity for a minute, until I remembered what was bothering me, really.  When the pain in my back started, I thought, 'Oh, yeah.  Because this is when Dad died...'  So in order to make my peace with the holiday, I'm going to write my own Seder for next year, and invite folks to my place, but that's another story, today is all about the Year in Review!

Last year, I started with griping about how Nexus still hadn't seen the light of day, and how I was taking a 'leave of absence' from Goddard due to the extreme stress of dealing with my mother in court.  I'm happy to say that Nexus has been completed.  Well, as complete as any piece ever really is, because I'm sure I could still (and always) tweak a few things...but it's an actual book, now, and I'll take some shots to show it off ~ 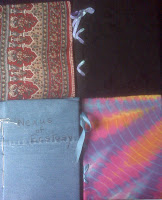 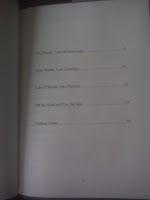 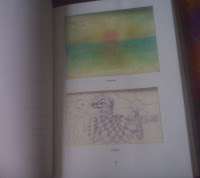 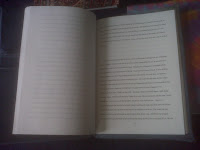 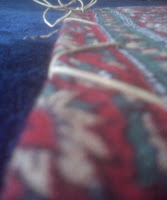 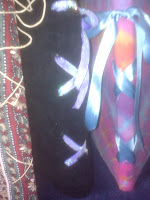 Yaay!  There it is.  In whatever glory it has.  If you want one, you can send me $25 - $40 dollars, and I'll mail it out to you!  The tie-dye one is mine, sorry, but there will be more designs, coming soon!  It's all the same book inside, and each copy will have a unique cover - feel free to let me know if you have any preferences, I'll see what I can do!

So there's a giant 'to do' that's been on my list for years, completed finally.  That and college, all rolled into one, hooray for progress!  I have to say I did a shitty job on my thesis and I ought to be punished for producing such low-caliber work, but I'll go back for my Master's, to redeem my self-worth by taking on the challenge of raising my own bar.  I was gonna take a picture of my diploma, and the nifty little pin they gave me in 'welcome to Goddard's alumni community', but that would be overkill, and really, it's just a piece of paper with my name on it.  That makes two things that are looking much better from this side, this year - another is the dreadful lawsuit, with my evil mother walking away with a mere one visit a month, which is more than I wanted to give her, but it's a great deal less than what she asked for, and that's the end of that.

I'm still dealing with 'tinnitus', the constant ringing in my ears, but I've got myself pretty convinced it's a deep-body issue that will only be solved by yoga, cleanses, and long, hard work.  The itchy red patch of rash on my right ankle is looking MUCH better, and though it still isn't completely healed, it looks and feels better than it has in years...change in diet?  Change in attitude?  College/Nexus?  All of the above..and more?  Still, my general health has improved, even in the face of gaining back the 20 lbs. I managed to lose last year, blech.  We're still in the same apartment, about 10 months now, and it looks like we're doing okay here.  I feel the urge to roam so deep in my bones it hurts, sometimes, but I really think we're where we need to be, so I'm gonna sit tight, and ride it out as best I can.  I made a promise, and that's how I roll.

A promise - measured in the lengthening of my boy's limbs, over a summertime.  Such a promise he is to me, of all my tomorrows, bright and sorrowful.  Age creeping upon me like a looked-for respite, a reason to sit down and smile, while I wave him on ahead, falling ever further behind, disappearing into my own forever.  What an amazing gift is motherhood, and the wisdom we learn from our children - oh, for the chance at another spin around this wheel!  How much we just never know, and how much we just need to love.  And how much of it is silence.  How much?  It's been a trying year of new developments with the boy, as he grows and reasons and learns.  But he is growing, and reasoning, and learning, so I stand on the sidelines and cheer, and hope I'm feeding him the right fire to launch his rockets for the stars.  Poetry is the heat from off his skin - he is magnificence, divine.

No big Summer plans, other than camp for him and work for me, but Rainbow may be on this coast this year, so...we'll see.  I'll probably make another attempt to grow myself a salad on my porch, in pots, and those embarrassing photos will most likely make up my summer stock shares this year, as they have in the past!  One of these days, I'll have some success - I know I will!  Also, I'm sporting a new vehicle this year, Larry, the Chrysler Concorde.  He got named Larry after the guy who sold him to us - the boy put the name in for a suggestion, and the guy made such a big deal about it, telling everyone in the dealership we were naming the car after him, I couldn't not name the car Larry, so there it is.  Larry.  We'll have to come up with a nickname, maybe...

And can you believe?  STILL no boyfriend!  I've decided I just give off a 'not interested' vibe, because in most ways, I'm not interested.  I have enough going on just trying to keep my own little boat floating, the last thing I need is to upset the balance that's barely there to begin with.  Hell, I have a hard enough time making and keeping friends - and lovers can be infinitely more complicated.  How I long for the 80's...HAhahahahaa!  No, but I do, though, for what they were to me in terms of my free-love decade.  For someone who worships at the 'gates of freedom' as I do, this dry spell is enraging!  I am in need of some serious release, people.  Feel free to direct any and all sacrificial lambs to my slaughter.  Although I probably lost more friends that I made this year, and I hope the new ones don't come to hate me as the old ones did, I'm happily reporting being in a much better place than I was last April (at this particular moment), and I feel good for having taken the time to notice that.  So it wasn't a bad year, and here's to all of y'all awesome people whose good energy helps to sustain me, whoever and wherever ye may be!